Maui Weddings in the News

Maui Weddings in the News again.  ( The article is below) We are extremely proud that HawaiiWedding.Com was THE VERY FIRST WEDDING COMPANY ON-LINE IN THE WORLD! We have been featured in many media outlets including USA Today. Below is the article published when we were called Maui Dreamtime Weddings. When we decided to learn HTML, called UNIX back in the early 90s, our friends thought we were crazy. World Wide Web? What is that they asked? It’s the future, we replied. Laughter everywhere. The media have been following us for years. Being the first in many things: We were the first wedding company to advertise on-line. The name of the company we advertised on was called ” Go To”.

A company named “Google” bought them out, and we started advertising on this thing called “google”. What a stupid name I thought. We started turning down media interviews. We were too busy working ( getting bookings from google)  to waste time doing another interview. lol. And how everyone laughed when we used the words “lol”. Are you guys crazy? How many magazines can we be featured in, we thought? We need to make money, we are not rich in any sense of the word.

But, when  USA Today said Maui Weddings in the News would be good publicity for us ( this was 14 years ago). We agreed. The nation most read newspaper! So, look forward, dream the impossible, don’t laugh at new ideas as ideas turn into reality. If you are good forward thinking, the media will follow you. They need good stories! Mahalo. 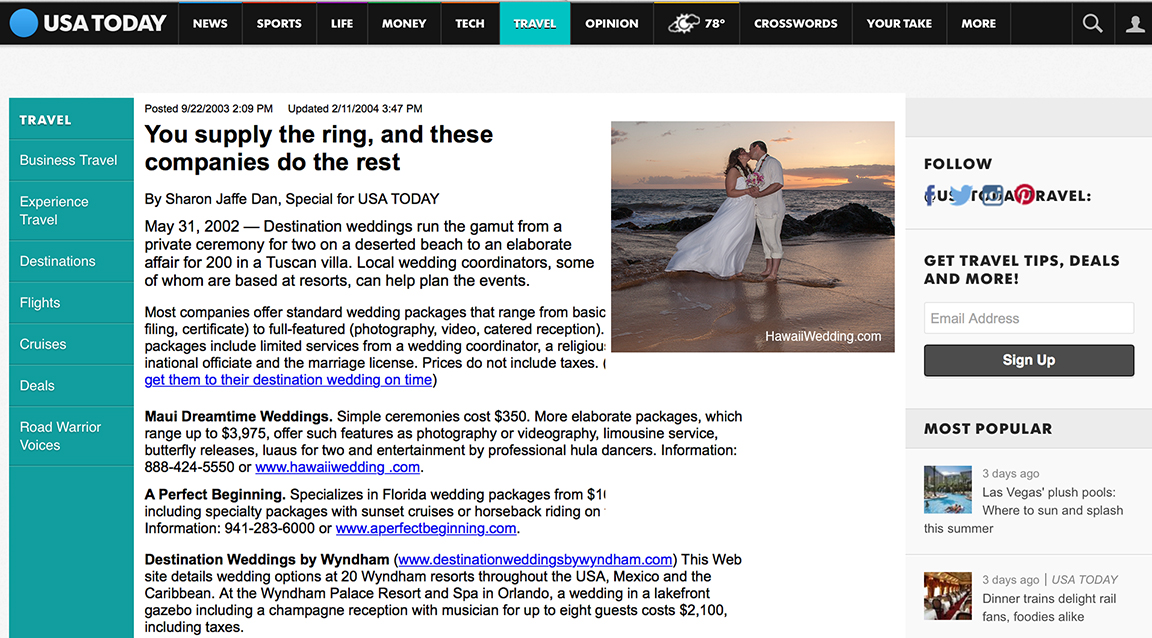 We are a licensed wedding planning company in Hawaii since 1994. We have officiants, photographers, license info, wedding planners, etc.
6 2    View on Facebook

We are a licensed wedding planning company in Hawaii since 1994. We have officiants, photographers, license info, wedding planners, etc.
6    View on Facebook

Hawaii Wedding & Vow Renewal4 weeks ago
Professional photos to last generations. We have the best! Planning weddings and vow renewals on Maui since 1994. www.hawaiiwedding.com, #mauiwedding, #hawaiiwedding

Hawaii Wedding and Vow Renewal
4.9
Based on 160 reviews
See all reviewsWrite a review

Larry M
23:15 01 Mar 22
Hawaii Weddings truly make dreams come true. Everyone was very helpful and patient with us from the very first call to... our big day many months later. We got married on Maluaka Beach in Maui and they knew every detail and it went flawlessly. We are so very grateful and we highly recommend their services. The photos that Ian took were ABSOLUTELY BREATHTAKING!!!read more

LAURA UTLEY
00:35 28 Feb 22
Kevin provided a perfect beach backdrop and a meaningful service for renewing our vows of 20 years of marriage. Louise... played and sang beautiful Hawaiian songs for us. This was exactly what we wanted. Aloha Kevinread more

Noreen Sanders
17:49 11 Feb 22
My husband Greg and I were married just 3 days ago here in Hawaii. We can not put in to words how happy we are with... Kevin and his team. We are from New York and have never been to the islands before. Planning a wedding on our own seemed like a daunting task. I found Hawaii Wedding and Vow Renewal through an online search and I am so very grateful that I did. I knew we were in good hands from our first conversation with Kevin. Every detail was handled with perfection. At our ceremony, we found Kevin to be sincere, kind and compassionate. We worried about nothing, we showed up and enjoyed our day…overjoyed with everything!read more