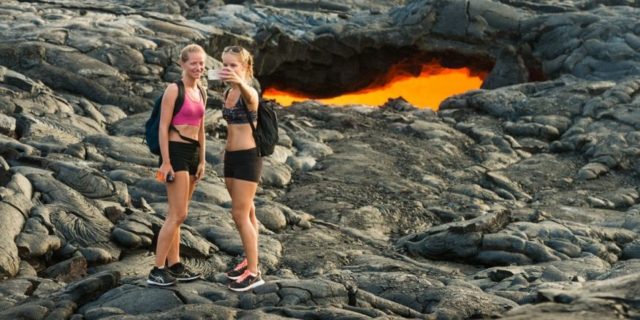 Posted by HawaiiWedding on Jul 28, 2018 in Blog, Hawaii Weddings | 0 comments

Hawaii Volcanoes and Weddings happening here have received much media attention. With red lava flowing around a particular neighborhood on far east side of the Big Island Of Hawaii, the pictures are stunning and the TV news makes the eruptions appear much more serious than it is.

( Update 9/19) The volcano has stopped flowing and the Big Island is safe to travel to.   Many couples “island-hop” via plane from Maui to the Big Island.

The truth is just a tiny fraction of the Big Island is in trouble with some homes catching fire. Over the last few months since Kilauea woke up, one person has died. This is tragic to the family but threats to others remain extremely very minimal. With so many weddings and other tourism potentially threatened it’s important to deal with the facts and not dwell on media sensationalism.

Hawaii Governor David Ige stated  “Hawaii’s air quality is being closely monitored on a continuing basis by scientists, meteorologists and the Hawaii State Department of Health. This team of experts says the air quality in the Hawaiian Islands is safe for residents and visitors, except in the affected areas.”

Governor Ige also stated  “The bottom line is that there is no reason for travelers to avoid making their vacation plans in the Hawaiian Islands due to safety concerns because of Kilauea volcano,”

The Big Isalnd’s volcano is becoming quite the tourist attraction. Wedding couples and all can take helicopter tours over it and see the amazing views. There are also cruise ships that sail around the island with passengers getting a great view and experience.

Maui has no active volcanoes. Our Mt. Haleakala volcano is dormant and a huge draw for tourism. It is over 10,000 ft and you can hike the crater and experience something  like no where on our planet. Many people say Haleakala looks like the planet Mars landscape. So, if you are considering having a wedding in Hawaii, come to Maui, voted best island world-wide by Expedia customers 2017, Conde Nest magazine readers for 19 years, and also rated #1 by Travel and Leisure Magazine. See our activity page for activities such as biking down the volcano, and hiking tours here.

Hawaii Wedding & Vow Renewal1 week ago
Sunset is a popular time to get married. Then, go right to an oceanfront restaurant to celebrate after the romantic photography.

We are a licensed wedding planning company in Hawaii since 1994. We have officiants, photographers, license info, wedding planners, etc.
8 1    View on Facebook

Hawaii Wedding and Vow Renewal
5.0
Based on 165 reviews
See all reviewsWrite a review

Katie Price
19:28 02 Jun 22
We had the most perfect, amazing time. Thank you so much to the entire team at Hawaii Wedding and Vow Renewal!... Everything was taken care of for us, including the Marriage License appointment the morning of our ceremony. The team that met us at the beach was absolutely amazing and so professional! We felt completely taken care of from start to finish. I am recommending this company to anyone I hear that is interested in eloping or getting a vowel renewal!!read more

Jeff Pentecost
13:12 31 May 22
From start to finish, our experience was absolutely perfect in every way. Communications were prompt, personalized,... clear, and straightforward. There was no pressure whatsoever. They made it obvious that our experience was the highest priority with their flexibility. Kevin made our morning at the beach the most memorable day of our lives. Fabulous!read more

Rachel Snethun
14:50 26 Apr 22
This year we celebrate 20 years of marriage and we wanted to make it super special; not only did we want to make this... day special for us, but we wanted to make it special for our children. Hawaii wedding and vow renewal will take your ideas and make it a reality. We had a very romantic setting on a beach in Wailea. It was a sunset vow renewal with our two children. The wedding ceremony was 10 minutes which was perfect. After the ceremony we had some fun with Sara, an amazing photographer, who captured our memories in the best way. It may have been cloudy but I am so incredibly happy with the results. Thank you Hawaii wedding and vow renewal for making our day so special and turning our dreams into a reality. A day we will never forget!read more

Kristen Kupniewski
19:58 25 Apr 22
Aloha!Our vow renewal in Makena was great! Exceeded our expectations- the location was picturesque. The ceremony was... short and sweet and the photos were beautiful. We loved it and were extremely happy with the company’s services!read more